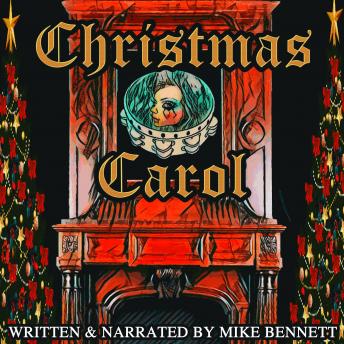 The imaginative story has been written and loosely adapted around the Charles Dickens classic "A Christmas Carol".

The intriguing tale is centred around a selfish young lady called Carol, who somehow makes it her business to ruin everybody's Christmas celebrations each and every year. With her awful greedy father Ebegezer Stooge, encouraging her to develop her ever enveloping sense of greed for financial gain. Thus his bad parenting skills prove disastrous causing his once innocent daughter to become a little monster.

In complete contrast, her lovely brothers Sheridan and Kingsley aim to use their diverse range of musical skills to raise money for the poor. However Carol, also known as 'Christmas Carol', along with her father and easily led mother Doris, set out to exploit Sheridan and Kingsley's prodigious talent for commercial gain!

Sadly, the slightly vulnerable young boys are forced to do a tour performing their brilliant Christmas music, augmented by an extremely out of time tambourine. This is played by Carol who's voice is so annoying, the victims of the carol singing tour give them silver and gold, to get them as far away from their doorsteps as possible.

To everyone's surprise when Ebegezer Stooge stages a much hyped concert in the Village Hall, A strange character appears playing an amazing flying V guitar. On meeting this charismatic man, Carol's insidious method of thinking slowly starts to change for the better. The name of the mystical man in question is the 'Toast of Christmas Blast'. He got this intriguing name through his love of making a toast to Christmas, for all the right reasons and the fact that he has a blast on stage with his wonderful guitar playing, in order to raise money for the poor.

Find out what happens when he meets Christmas Carol and changes the lives of both her and those around her for ever and a day...