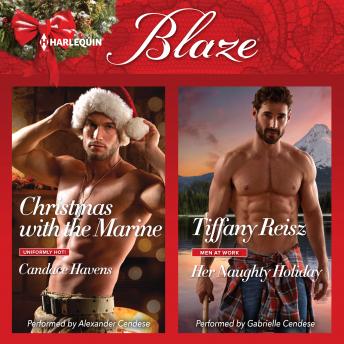 Christmas with the Marine & Her Naughty Holiday

Christmas with the Marine

Christmas is almost here, and guys are the last thing on personal shopper Ainsley Garrett's list. But her icy resolution melts when she sees an incredibly hot Marine shopping for toys. A man in uniform with a hot bod and a heart of gold? Maybe a gal can believe in Santa after all…

Major Ben Hawthorne has his career to think about, but when it comes to Ainsley, he's willing to break his own rules, at least for one night—provided they can get this insanely wicked attraction out of their systems. Only, once isn't enough. Now Ainsley's checking her list twice…before she falls for a Marine who's naughty and nice.

A feast she wasn't expecting!

Clover Greene would sooner crawl into her oven than host family for Thanksgiving dinner. Yet another annual ritual of too much food, served with a side of criticism over "Clover's Bad Life Choices." This year, she needs to distract them all—with a handsome fake boyfriend. And she has the perfect guy in mind.

Contractor Erick Fields is the poster boy for sexy single dads, and Clover has been secretly crushing on him for ages. She certainly wasn't expecting Erick to agree to her insane charade…or to add lots of hot, wicked sex to the deal. If they can pull it off, the worst Thanksgiving ever might give them something to be really thankful for!

Christmas with the Marine & Her Naughty Holiday