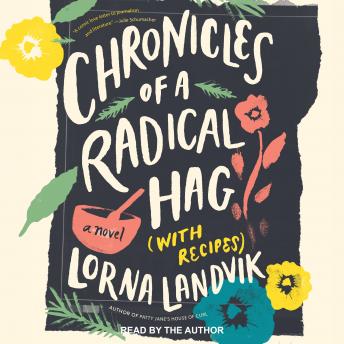 Chronicles of a Radical Hag (with Recipes): A Novel

When Haze Evans first appeared in the small-town newspaper, she earned fans by writing a story about her bachelor uncle who brought a Queen of the Rodeo to Thanksgiving dinner. Now, fifty years later, when the beloved columnist suffers a massive stroke and falls into a coma, publisher Susan McGrath fills the void (temporarily, she hopes) with Haze's past columns, along with the occasional reprinted responses from readers. Most letters were favorable, although Haze did have her trolls; one Joseph Snell in particular dubbed her 'liberal' ideas the 'chronicles of a radical hag.'

Framed by news stories of half a century and annotated with the town's chorus of voices, Haze's story unfolds, as do those of others touched by the Granite Creek Gazette.

With her customary warmth and wit, Lorna Landvik summons a lifetime at once lost and recovered, a complicated past that speaks with knowing eloquence to a confused present. Her topical but timeless Chronicles of a Radical Hag reminds us-sometimes with a subtle touch, sometimes with gobsmacking humor-of the power of words and of silence, as well as the wonder of finding in each other what we never even knew we were missing.

Chronicles of a Radical Hag (with Recipes): A Novel