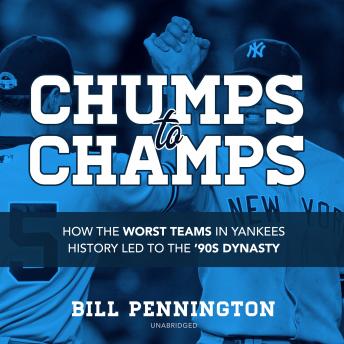 Chumps to Champs: How the Worst Teams in Yankees History Led to the '90s Dynasty

The untold story of the time when the New York Yankees were a laughingstock-and how out of that abyss emerged the modern Yankees dynasty, one of the greatest in all of sports
The New York Yankees have won twenty-seven world championships and forty American League pennants, both world records. They have twenty-six members in the Hall of Fame. Their pinstripe swag is a symbol of 'making it' worn across the globe. Yet some twenty-five years ago, from 1989 to 1992, the Yankees were a pitiful team at the bottom of the standings, sitting on a fourteen-year World Series drought and a 35 percent drop in attendance. To make the statistics worse, their mercurial, bombastic owner was banned from baseball.
But out of these ashes emerged the modern Yankees dynasty, a juggernaut built on the sly, a brilliant mix of personalities, talent, and ambition. In Chumps to Champs, Pennington reveals a grand tale of revival. Listeners encounter larger-than-life characters like George Steinbrenner and unexplored figures like award-winning manager Buck Showalter, Don Mattingly, and the crafty architect of it all-general manager Gene Michael, who assembled the team's future stars-Rivera, Jeter, Williams, O'Neill, and Pettitte.
Drawing on unique access, Pennington tells a wild and raucous tale.

Chumps to Champs: How the Worst Teams in Yankees History Led to the '90s Dynasty