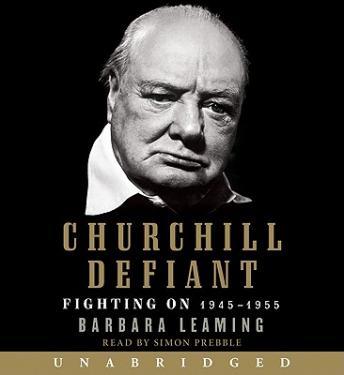 In Churchill Defiant, Leaming tells the tumultuous behind-the-scenes story of Churchill's refusal to retire after his 1945 electoral defeat, and the bare-knuckled political and personal battles that ensued. Her ground-breaking biography Jack Kennedy: The Education of a Statesman, was the first to detail Churchill's extraordinary influence on Kennedy's thinking. Now in Churchill Defiant, Leaming gives us a vivid and compelling narrative that sheds fresh light on both the human dimension of Winston Churchill and on the struggles and achievements of his final years. At last, in Leaming's eloquent account, we understand the tangled web of personal relationships and rivalries, the intricate interplay of past and present, the looming sense of history that makes the story of these years as fascinating as anything in the extraordinary century-long saga of Winston Churchill's life.