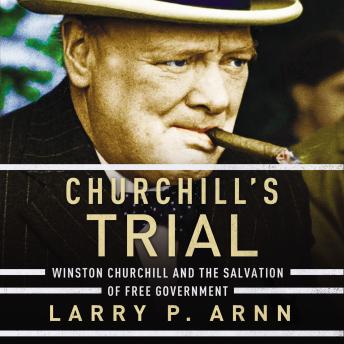 Churchill's Trial: Winston Churchill and the Salvation of Free Government

No statesman shaped the twentieth century more than Winston Churchill. To know the full Churchill is to understand the combination of boldness and caution, of assertiveness and humility, that defines statesmanship at its best. With fresh perspective and insights based on decades of studying and teaching Churchill, Larry P. Arnn explores the greatest challenges faced by Churchill over the course of his extraordinary career, both in war and peace—and always in the context of Churchill’s abiding dedication to constitutionalism.

Churchill’s Trial is organized around the three great challenges to liberty that Churchill faced: Nazism, Soviet communism, and his own nation’s slide toward socialism. Churchill knew that stable free government, long enduring, is rare, and hangs upon the balance of many factors ever at risk. Combining meticulous scholarship with an engrossing narrative arc, this book holds timely lessons for today. Arnn says, “Churchill’s trial is also our trial. We have a better chance to meet it because we had in him a true statesman.”

In a scholarly, timely, and highly erudite way, Larry Arnn puts the case for Winston Churchill continuing to be seen as statesman from whom the modern world can learn important lessons. In an age when social and political morality seems all too often to be in a state of flux, Churchill’s Trial reminds us of the enduring power of the concepts of courage, duty, and honor.

--Andrew Roberts, New York Times bestselling author of Napoleon: A Life and The Storm of War

Larry Arnn has spent a lifetime studying the life and accomplishments of Winston Churchill. In his lively Churchill’s Trial, Arnn artfully reminds us that Churchill was not just the greatest statesman and war leader of the twentieth century, but also a pragmatic and circumspect thinker whose wisdom resonates on every issue of our times.

In absorbing, gracefully written historical and biographical narration, Larry Arnn shows that Churchill, often perceived as inconsistent and opportunistic, was in fact philosophically rigorous and consistent at levels of organization higher and deeper than his detractors are capable of imagining. In Churchill’s Trial Arnn has rendered great service not only to an incomparable statesman but to us, for the magnificent currents that carried Churchill through his trials are as admirable, useful, and powerful in our times as they were in his.

--Mark Helprin, New York Times bestselling author of Winter’s Tale and In Sunlight and in Shadow

Churchill’s Trial, a masterpiece of political philosophy and practical statesmanship, is the one book on Winston Churchill that every undergraduate, every graduate student, every professional historian, and every member of the literate general public should read on this greatest statesman of the twentieth century. The book is beautifully written, divided into three parts–war, empire, peace–and thus covers the extraordinary life of Winston Churchill and the topics which define the era of his statesmanship.

--Lewis E. Lehrman, cofounder of the Lincoln and Soldiers Institute at Gettysburg College and distinguished director of the Abraham Lincoln Association