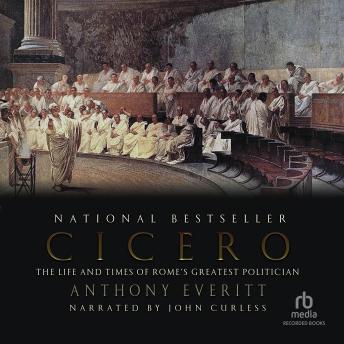 Cicero: The Life and Times of Rome's Greatest Politician

- John Adams said of Cicero, 'All ages of the world have not produced a greater statesman and philosopher combined.' Voltaire said of Cicero, 'He taught us how to think.' And yet Anthony Everitt's authoritative yet accessible work is the first one-volume biography of the Roman statesman in over 25 years. - 'Using Cicero's letters to his good friend Atticus, among other sources, Everitt recreates the fascinating world of political intrigue, sexual decadence and civil unrest of Republican Rome . Everitt's first book is a brilliant study that captures Cicero's internal struggles and insecurities as well as his external political successes.'-Publishers Weekly (starred review) - 'Comprehensive, accessible survey of the personal and political life of lawyer, politician, philosopher, and crank Marcus Tullius Cicero . Masterfully lucid and compelling; sure to be required reading in the Cicero canon.'-Kirkus Reviews

Cicero: The Life and Times of Rome's Greatest Politician

This title is due for release on December 5, 2014
We'll send you an email as soon as it is available!