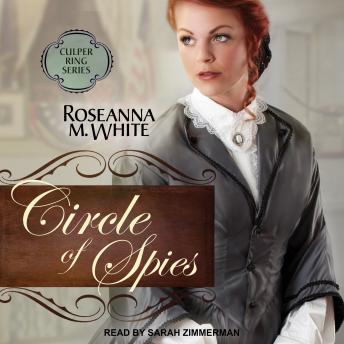 1865-Marietta Hughes never wanted to be a spy, but the family legacy of espionage is thrust upon her as the War Between the States rolls on. Unknown to her, the Knights of the Golden Circle-a Confederate secret society bent on destroying the Union her brother died for-has been meeting in a hidden lair beneath her home. Faced with the secrets of her late husband and his brother, whom she thought she could trust with anything, Marietta's world tilts out of control. Can she right it by protecting a Union agent infiltrating the KGC?

Slade Osborne, an undercover Pinkerton agent, is determined to do whatever is necessary to end the conflict between the North and the South. When he infiltrates this secret cell, it isn't just their inner workings that baffle him-it's the beautiful woman who seems to be a puppet for the new leader and yet. . . so much more.

Do they dare trust each other in this circle of intrigue? Will their shared faith sustain them? And can Mari and Slade stymie the enemy long enough to see their beloved country reunited?