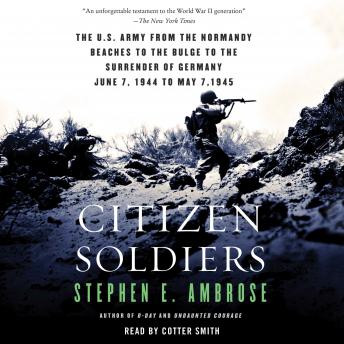 Citizen Soldiers: The U S Army from the Normandy Beaches to the Bulge to the Surrender of Germany

From Stephen E. Ambrose, bestselling author of Band of Brothers and D-Day, the inspiring story of the ordinary men of the U.S. army in northwest Europe from the day after D-Day until the end of the bitterest days of World War II.

In this riveting account, historian Stephen E. Ambrose continues where he left off in his #1 bestseller D-Day. Citizen Soldiers opens at 0001 hours, June 7, 1944, on the Normandy beaches, and ends at 0245 hours, May 7, 1945, with the allied victory. It is biography of the US Army in the European Theater of Operations, and Ambrose again follows the individual characters of this noble, brutal, and tragic war. From the high command down to the ordinary soldier, Ambrose draws on hundreds of interviews to re-create the war experience with startling clarity and immediacy. From the hedgerows of Normandy to the overrunning of Germany, Ambrose tells the real story of World War II from the perspective of the men and women who fought it.

Citizen Soldiers: The U S Army from the Normandy Beaches to the Bulge to the Surrender of Germany

This title is due for release on November 1, 1997
We'll send you an email as soon as it is available!