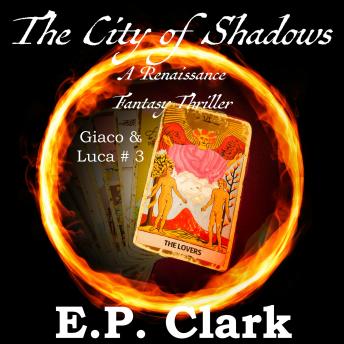 The City of Shadows: A Renaissance Fantasy Thriller

E.P. Clark
A free trial credit cannot be used on this title

The shadows are speaking. Can their riddle be unraveled?

Eleven years ago, Royal bodyguard Giacomo da Prado first followed young Prince Luca into the shadows. Plunged against his will into a world of illicit magic, Giaco has tried to hold onto the rationality of a Reborn man, even as he walks the line between the two worlds.

But now, called upon to serve as Prince Luca’s bodyguard once again, Giaco has to face all his worst fears. Luca has disappeared into the shadows—and Giaco’s beloved wife, the famed card-reader Amanda, is in danger of being pulled after him. Can Giaco overcome his training and his innate distaste of dark magic in order to save the two people he loves the most?

Set in a magical version of Renaissance Florence, The City of Shadows will appeal to fans of paranormal and occult suspense, as well as dark and historical fantasy. It is Book 3 in the Giaco & Luca Series, but can be enjoyed as a standalone.