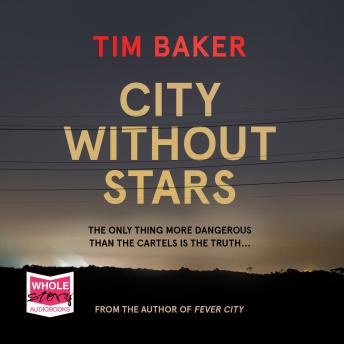 An epic second novel from the CWA John Creasey New Blood Dagger-shortlisted and Shamus-nominated author of Fever City.
In Ciudad Real, Mexico, a deadly war between rival cartels is erupting, and hundreds of female sweat-shop workers are being murdered. As his police superiors start shutting down his investigation, Fuentes suspects most of his colleagues are on the payroll of narco kingpin, El Santo.
Meanwhile, despairing union activist, Pilar, decides to take social justice into her own hands. But if she wants to stop the killings, she's going to have to ignore all her instincts and accept the help of Fuentes. When the name of Mexico's saintly orphan rescuer, Padre Márcio, keeps resurfacing, Pilar and Fuentes begin to realise how deep the cover-up goes.
"An exhilarating and kaleidoscopic novel that will also break your heart." STAV SHEREZ, author of A Dark Redemption

"City Without Stars is an intelligent thriller that moves at a breath-taking pace." NICHOLAS SEARLE, author of The Good Liar