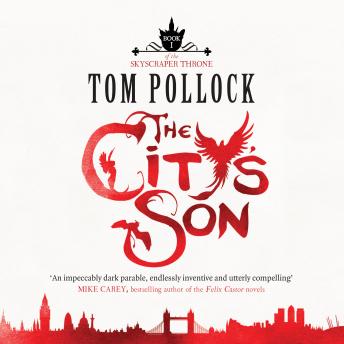 Tom Pollock's debut novel and the first volume of the Skyscraper Throne series, The City's Son is an imaginative tale of adventure set in a city that is quite literally alive.Beneath the streets of London lies a city of monsters and miracles, where wild train spirits stampede over the tracks and glass-skinned dancers with glowing veins light the streets.Following a devastating betrayal, Beth Bradley, a sixteen-year-old graffiti artist, is suspended from school. Running from a home that she shares with her father who has never recovered after Beth's mother's death, Beth stumbles into the hidden city and meets Filius Viae, London's asphalt-hued crown prince. And her timing couldn't have been more perfect. An ancient enemy is stirring under St. Paul's Cathedral, determined to stoke the flames of a centuries-old war, and Beth and Fin find themselves drawn into the depths of the mysterious urban wonderland, hoping to prevent the destruction of the city they both know and love.