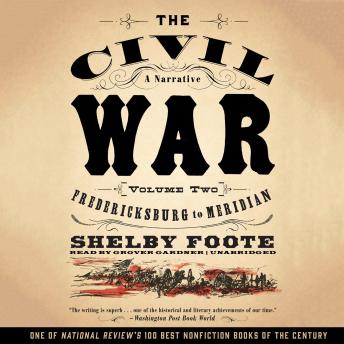 The Civil War: A Narrative, Vol. 2: Fredericksburg to Meridian

The Civil War: A Narrative, Vol. 2 continues one of the most remarkable works of history ever fashioned. Focusing on the pivotal year of 1863, the second volume in Shelby Foote's masterful narrative history brings to life some of the most dramatic and important moments in the Civil War, including the Battle of Gettysburg and Grant's Vicksburg Campaign.

The word narrative is the key to this book's extraordinary incandescence and truth: the story is told entirely from the point of view of the people involved. One learns not only what was happening on all fronts but also how the author discovered it during his years of exhaustive research.

This is a must-listen for anyone interested in one of the bloodiest wars in America's history.

"Though the events of this middle year of the Civil War have been recounted hundreds of times, they have rarely been re-created with such vigor and such picturesque detail."-New York Times Book Review