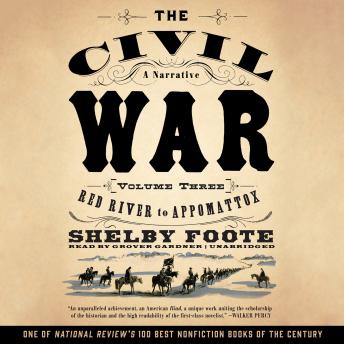 The Civil War: A Narrative, Vol. 3: Red River to Appomattox

Here is the final volume of the highly acclaimed narrative history named one of the best nonfiction books of the century by National Review.

In The Civil War: A Narrative, Vol. 3, Shelby Foote follows the events of the war from 1862 through 1864, discussing the strategies of both the North and the South and assessing the performance of the Union generals. The book opens with the beginning of the two final, major confrontations of the war: Grant against Lee in Virginia and Sherman pressing Johnston in North Georgia. In vivid narrative as seen from both sides, he tells of the climactic struggles, great and small, on and off the field of battle, that finally decided the fate of this nation.

The Civil War: A Narrative, Vol. 3 brings to a close the story of four years of turmoil and strife that altered American life forever.