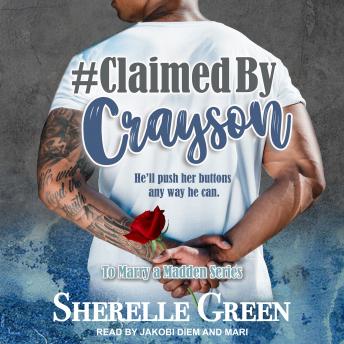 If there were ever a man who prided himself on always being up front with women, it's tatted bad boy, Crayson Madden, in the flesh. His world may revolve around sex and cigars, but there's a lot more to this cigar lounge owner than what meets the eye. Too bad Jordyn Jameson spends more time arguing with him, than seeing beyond his asshole-ish ways. Now, they are forced together whether she likes it or not and the more Crayson pushes her buttons, the more he likes what he sees behind the confident siren.

Dessert bar owner, Jordyn Jameson, would rather poke her eyes out than spend time with the certified playboy. Unfortunately, this creator of tasty treats doesn't have a choice in the matter. Crayson has recipe for disaster written across his sexy forehead and the one thing she's learned from her past, is that men like Crayson were good for one thing and one thing only. She knows he wants her in his bed, and although she may be tempted, she's not giving in. Besides, she has bigger things on her mind. Jordyn has been harboring a big secret and needs help fast. The irony of it all? The last man she'd ever sleep with may be the only one to help ensure that her secret stays that way.