Clan Dominance: The Sleepless Ones #3 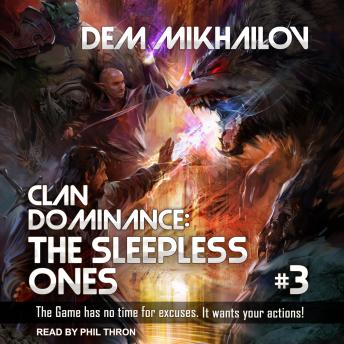 Nothing is ever given freely. One has to pay the full price for everything one gets. Easy money for a seemingly minor quest in a game? Well, you're obviously being played for a mark. Suddenly stumbled upon a unique spell coveted by the entire world of Waldyra? That automatically makes you the quarry for the game's top clans, each of which will be hunting you-IRL as well as inside the game. Or have you, perhaps, chanced upon a gift from a legendary set? Expect trouble for certain, for there's a horrendous creature hunting you now, intending to take your life eventually-it's but a question of time.

And yet, despair not! Deal with things resolutely instead of going with the flow. You've got to act; you've got to play your own game. That's the only way of becoming a legend of Waldyra. You cannot run from your problems forever-at some point, you'll still have to face them, so face them on your own terms. Talking to someone who betrayed you in the past (as you may have been thinking) would probably be a good start. Or, perhaps, addressing the menace and turning the tables. Who said the quarry couldn't become the hunter once again?

Oh, and there's another thing to think of: the team you'll be doing it with. Solitary warriors don't win any battles, even if they can have all the fun in the world frolicking on their own.

Clan Dominance: The Sleepless Ones #3