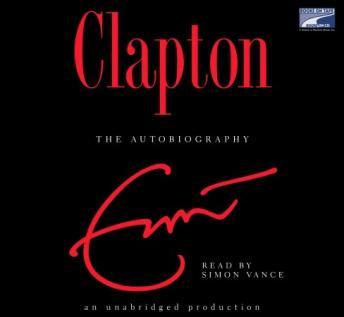 “I found a pattern in my behavior that had been repeating itself for years, decades even. Bad choices were my specialty, and if something honest and decent came along, I would shun it or run the other way.”

With striking intimacy and candor, Eric Clapton tells the story of his eventful and inspiring life in this poignant and honest autobiography. More than a rock star, he is an icon, a living embodiment of the history of rock music. Well known for his reserve in a profession marked by self-promotion, flamboyance, and spin, he now chronicles, for the first time, his remarkable personal and professional journeys.

Born illegitimate in 1945 and raised by his grandparents, Eric never knew his father and, until the age of nine, believed his actual mother to be his sister. In his early teens his solace was the guitar, and his incredible talent would make him a cult hero in the clubs of Britain and inspire devoted fans to scrawl “Clapton is God” on the walls of London’s Underground. With the formation of Cream, the world's first supergroup, he became a worldwide superstar, but conflicting personalities tore the band apart within two years. His stints in Blind Faith, in Delaney and Bonnie and Friends, and in Derek and the Dominos were also short-lived but yielded some of the most enduring songs in history, including the classic “Layla.”

During the late sixties he played as a guest with Jimi Hendrix and Bob Dylan, as well as the Beatles, the Rolling Stones, and longtime friend George Harrison. It was while working with the latter that he fell for George’s wife, Pattie Boyd, a seemingly unrequited love that led him to the depths of despair, self-imposed seclusion, and drug addiction. By the early seventies he had overcome his addiction and released the bestselling album 461 Ocean Boulevard, with its massive hit “I Shot the Sheriff.” He followed that with the platinum album Slowhand, which included “Wonderful Tonight,” the touching love song to Pattie, whom he finally married at the end of 1977. A short time later, however, Eric had replaced heroin with alcohol as his preferred vice, following a pattern of behavior that not only was detrimental to his music but contributed to the eventual breakup of his marriage.
In the eighties he would battle and beat alcoholism and become a father. But just as his life was coming together, he was struck by a terrible blow: His beloved four-year-old son, Conor, died in a freak accident. At an earlier time Eric might have coped with this tragedy by fleeing into a world of addiction. But now a much stronger man, he took refuge in music, responding with the achingly beautiful “Tears in Heaven.”

Clapton is the powerfully written story of a survivor, a man who has achieved the pinnacle of success despite extraordinary demons. It is one of the most compelling memoirs of our time.