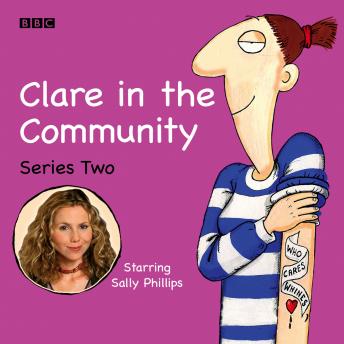 In this second hilarious series, social worker Clare Barker is still struggling to control both her professional and her private life. There are troublesome clients to deal with, as well as colleagues and her long-term partner Brian, who is as hapless as ever. These six episodes see Clare setting up a date between Helen and Simon, taking a holiday (and worrying that the office will fall apart without her), and accepting an invitation to be interviewed for Woman's Hour. Meanwhile, Brian walks out on her, the team volunteers for a street count to help the homeless, and Megan's baby is due. Based on the long-running Guardian cartoon strip, Clare in the Community has garnered huge critical acclaim and an audience of over half a million listeners. Starring Sally Phillips as Clare, with Alex Lowe as Brian and Nina Conti as Megan, this release is guaranteed to appeal to all fans of the sublimely self-important social worker.