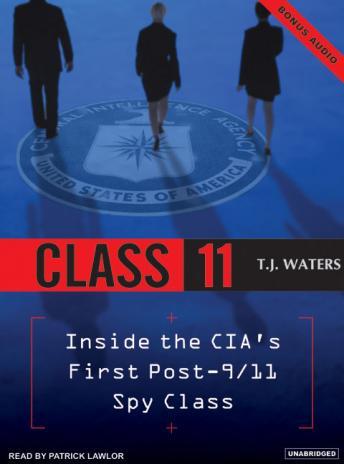 Written by one of its own graduates, Class 11: Inside the CIA's First Post-9/11 Spy Class is a gripping insider's look at the first post-9/11 CIA training class-the most elite and secretive espionage training program in the country.

Like all Americans, T. J. Waters was stunned, angry, and grief stricken by the terrorist attacks of September 11, 2001. More than that, he wanted to take action to help prevent such an event from ever happening again. Waters was not alone. In the weeks following the attacks, the Central Intelligence Agency received over 150,000 resumes from people wanting to serve their nation as spies. More than one hundred students were admitted to the CIA's Clandestine Service to become Class 11, the first post-9/11 CIA training class. It was the largest and most diverse class in the agency's history. Joining Waters were a World Trade Center victim's fiancee, an NFL alumnus, a New York City comedian, a college athletics coach, a hostage negotiator, and a single mother. Class 11 is the real story of how this band of everyday Americans joined together to endure the challenge of a lifetime and serve their country. Against the backdrop of Osama bin Laden's videotaped taunts; the Washington, D.C., sniper attacks; and the loss of a CIA field officer in Afghanistan, Waters takes readers behind the scenes, where the trainees learned methods of subterfuge, mastering disguises, withstanding interrogations, and crossing into hostile territory without being detected.

Class 11 is a fascinating and moving portrait of an extraordinary group of Americans with the courage and resolve to make a difference in the war on terror.

This title is due for release on November 10, 2006
We'll send you an email as soon as it is available!