Class: What She Does Next Will Astound You 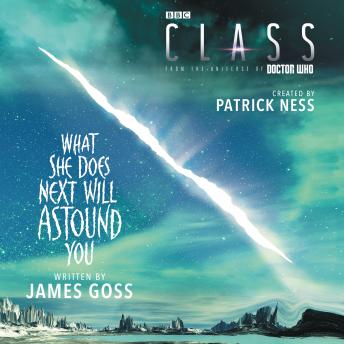 One of three thrilling companion novels set in the universe of the new Doctor Who spin-off show, Class, created by #1 New York Times bestselling novelist Patrick Ness, author of The Rest of Us Just Live Here and the Carnegie Medal-winning A Monster Calls.

“There’s no such thing as oversharing”…right?

Everyone at Coal Hill School has become obsessed with completing exciting dares posted on a strange new website, run by the charismatic vlogger Seraphin. Soon the challenges become more dangerous and competitive, yet even broken arms and fistfights don’t stop the craze for them. And then students start to disappear…

As April’s fragile group of friends starts to fracture, she decides she’s going to uncover the truth behind this site herself. Whatever it takes, whomever she hurts, April’s going to win. But then, to her horror, she wakes up and finds her whole world is changed.

What she does next will astound you.

Class: What She Does Next Will Astound You