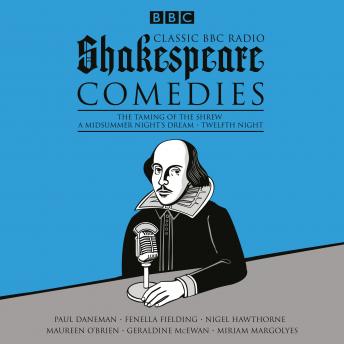 These three legendary plays, performed by some of the best-known theatrical actors of the 20th Century, are the perfect way to commemorate England's greatestdramatist.

The Taming of the Shrew: The controversial comedy about the battle of the sexes and a very unconventional marriage, starring Fenella Fielding as Katherine, with Miriam Margolyes as Bianca and Paul Daneman as Petruchio.

A Midsummer Night's Dream: One of Shakespeare'sbest-loved plays, this tale of warring fairies, eloping lovers and the magic and madness of love has bewitched audiences since its very first performance. Starring Nigel Hawthorne as Oberon with Maureen O'Brien as Titania.

Twelfth Night: Mistaken identity and a tangled love triangle lead to confusion and, ultimately, happiness in this comic masterpiece. Starring Dorothy Tutin as Viola, with Geraldine McEwan as Olivia and Stephen Murray as Malvolio.

Recorded at BBC Broadcasting House and featuring the BBC Drama Repertory company, with specially composed music including a score from the BBC Radiophonic Workshop, this is classic radio drama at its finest.Duration: 7 hours approx.