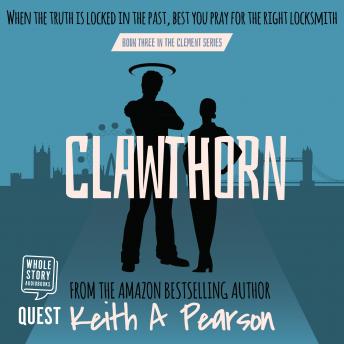 Written By: Keith A. Pearson

Clawthorn: the third book in the bestselling 'Clement' series.

Just four months after Emma Hogan was born, her father was convicted of a heinous crime and sent to prison for life. Forty-six years later, and now a London-based journalist, Emma discovers an old notebook she suspects might be connected to her father. Embossed on the front of that notebook is a single word - Clawthorn. Unbeknown to Emma, the innocent-looking notebook is anything but, and it takes a stranger with an uncanny knowledge of the past to warn her of that- an intriguing stranger named Clement. With neither the notebook nor Clement being quite what they seem, Emma digs for answers. As the past clashes with the present, Emma soon realises there is far more at stake than just a career-changing story.

by Keith A. Pearson