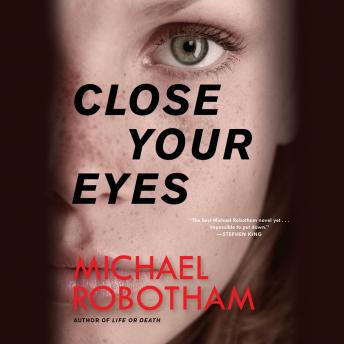 #1 International Bestseller
'Close Your Eyes: the best Michael Robotham novel yet. Once I reached the last 100 pages, it really was impossible to put down.' --Stephen King
When a former student bungles a murder investigation, clinical psychologist Joseph O'Loughlin steps in to face a ruthless killer.
A mother and her teenage daughter are found murdered in a remote coastal home, one defiled by multiple stab wounds and the other posed like Sleeping Beauty waiting for her prince. Joe O'Loughlin is drawn into the investigation when a former student, trading on Joe's reputation by calling himself 'the Mindhunter,' jeopardizes the police inquiry by leaking details to the media and stirring up public anger.

Joe discovers a link between the farmhouse murders and a series of vicious attacks in which the victims are choked unconscious and brutally scarred. Now, Joe must stop a ruthless and brash criminal who has apparently graduated to murder.

Much to his surprise, he is ably assisted by his eldest daughter, now a keen and courageous observer of her own right. Together they must track and catch a hunter who seems to anticipates every move they make.