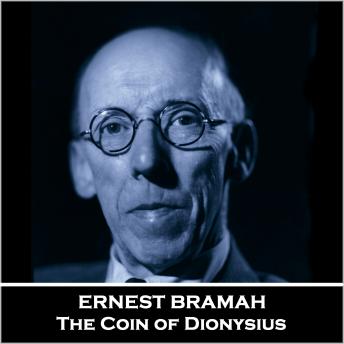 The Coin of Dionysius

Ernest Bramah was born on 20th March 1868. He was an intensely private man and very little about his life was ever released.Bramah dropped out of Manchester Grammar school at sixteen, in almost all his subjects he was close to the bottom of his class, and took a job at a farm. His father then invested substantial sums in setting him up with his own farm but Bramah's long term interests were elsewhere. In his spare time he would write vignettes on local subjects and send them to The Birmingham News for publication.In a now rather dramatic change of career he obtained the position of secretary to Jerome K Jerome and then to editing one of Jerome's magazines. Thereafter Bramah edited journals for a publishing firm that only ceased with its bankruptcy.He obtained success in his own right with the creation of the storyteller Kai Lung with humourous tales set in China, usually laced with fantasy elements. There seems to have been a certain vogue for stories with an oriental element at this time which Bramah was happy to take advantage of.His career blossomed across many genres; in humour, science-fiction, and supernatural he was ranked with the very best of the day. Even Orwell cited his work as an influence and as a predictor for the rise of Fascism and his own novel, 1984.At a time when the English Channel had yet to be crossed by an aeroplane, Bramah foresaw aerial express trains traveling at 10,000 feet, a nationwide wireless-telegraphy network, fax machines and cypher writing typewriters similar to the German Enigma machine. In 1914, Bramah created the blind detective Max Carrados. Despite the obvious obstacle to his deductive powers he was a literary and commercial success. Ernest Bramah died in Weston-Super-Mare on 27th June 1942 at the age of 74.