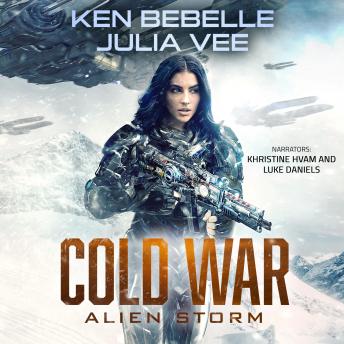 They invaded her planet. They ambushed her unit. They’ll have to pry Earth from her cold, dead hands…
When Lieutenant Cam Alvarez is called to investigate a desert massacre in the US Green Zone, she prepares for the worst. Once her team of soldiers arrives on the scene, she realizes the violence wasn’t committed by human hands. Alien invaders already dominate Earth’s expanding polar regions, but Cam had never seen Ringheads survive exposure to heat… until they storm her troops and abduct her.


On board the alien mothership, Cam knows she alone can warn the human resistance about the catastrophic new threat. Subjected to cruel experiments, she fights for control as the Ringheads slowly strip away her humanity. Against impossible odds, Cam must escape her captors and make an unthinkable sacrifice to give humanity one last shot at survival.


Buy Cold War: Alien Storm to bundle up for a subzero battlefront today!