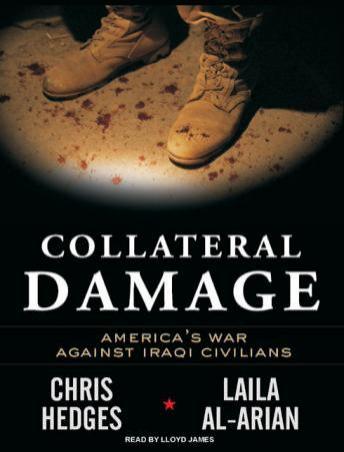 Bestselling author and Pulitzer Prize–winning journalist Chris Hedges and journalist Laila Al-Arian spent several months interviewing Iraqi war veterans to expose the patterns of the occupation and how it affects Iraqi civilians. The testimonies of these soldiers and marines provide a disturbing window into the indiscriminate killing of unarmed and innocent Iraqis that is carried out daily by the occupation forces.

Collateral Damage is organized around key military operations on the battlefield-convoys, checkpoints, detentions, raids, suppressive fire, and 'hearts and minds.' Hedges and Al-Arian uncover how the very conduct of the war and occupation have turned the American forces into agents of terror for most Iraqis. The military convoys that speed through the centers of towns, often driving on the wrong side of the street or on sidewalks, have become trains of death. Soldiers fire upon Iraqi vehicles with impunity at checkpoints; pregnant women being rushed to the hospital have been killed at roadblocks when their husbands failed to slow down, and children have watched in horror as their parents have been killed.

Hedges and Al-Arian show how this widespread pattern of civilian killing has fueled the insurgency in Iraq, giving rise to instability, sectarian violence, and total chaos.