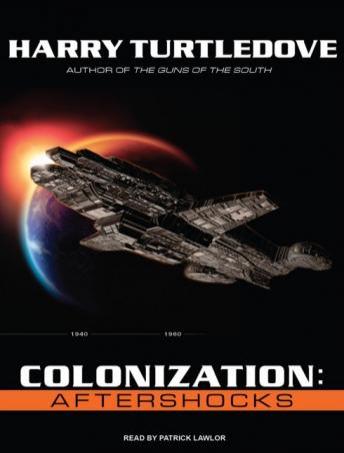 Set in the same universe as the Worldwar series, the Colonization series brings us to Earth in the 1960s, where four superpowers rule: the United States, Russia, Nazi Germany, and the aliens of the Race.

The arrival of the aliens shot Earth technology forward at a dizzying rate-the world of 1960 includes routine space shuttle traffic, computers on every desk, and other high-tech advancements. Aftershocks reveals that it was the United States that launched the nuclear offensive against the aliens, and when the aliens learn the truth, Indianapolis disappears in nuclear fire. In alien-held China, a full-fledged rebellion is launched, and in Poland, a nuclear bomb goes missing-held by Jewish forces who seek to use it against the Nazis.

The nations of Earth begin to realize that their only hope in holding back the aliens will be to work together. Because separately, they may face extinction.