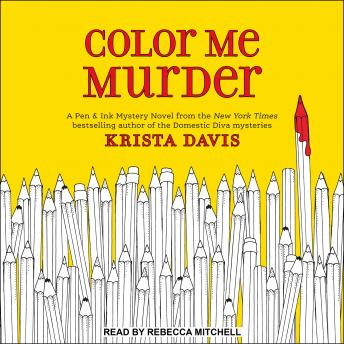 By day, Florrie Fox manages Color Me Read bookstore in Georgetown, Washington D.C. By night, she creates her own intricately detailed coloring books for adults, filling the pages with objects that catch her eye. There's plenty of inspiration in her new apartment-a beautiful carriage house belonging to Professor John Maxwell, Florrie's boss. He offers the property to Florrie rent-free with one condition-she must move in immediately to prevent his covetous sister and nephew from trying to claim it.

When the professor's nephew, Delbert, arrives, he proves just as sketchy as Florrie feared. But the following morning, Delbert has vanished. It's not until she visits the third floor of the store that Florrie makes a tragic discovery-there's a trap door in the landing, and a dead Delbert inside. The esteemed Professor Maxwell is an obvious suspect, but Florrie is certain this case isn't so black and white. Doodling clues, she begins to consider other colorful characters on the scene, all with a motive for murder. With a killer drawing closer, Florrie will need to think outside the lines . . . before death makes his mark again.