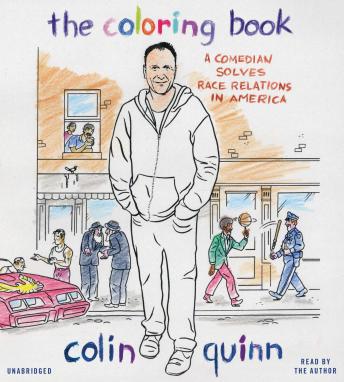 The Coloring Book: A Comedian Solves Race Relations in America

Colin Quinn has noticed a trend during his decades on the road-that Americans' increasing political correctness and sensitivity have forced us to tiptoe around the subjects of race and ethnicity altogether. Colin wants to know: What are we all so afraid of? Every ethnic group has differences, everyone brings something different to the table, and this diversity should be celebrated, not denied. So why has acknowledging these cultural differences become so taboo?

In The Coloring Book, Colin, a native New Yorker, tackles this issue head-on while taking us on a trip through the insane melting pot of 1970s Brooklyn, the many, many dive bars of 1980s Manhattan, the comedy scene of the 1990s, and post-9/11 America. He mixes his incredibly candid and hilarious personal experiences with no-holds-barred observations to definitively decide, at least in his own mind, which stereotypes are funny, which stereotypes are based on truths, which have become totally distorted over time, and which are actually offensive to each group, and why.

As it pokes holes in the tapestry of fear that has overtaken discussions about race, The Coloring Book serves as an antidote to our paralysis when it comes to laughing at ourselves . . . and others.