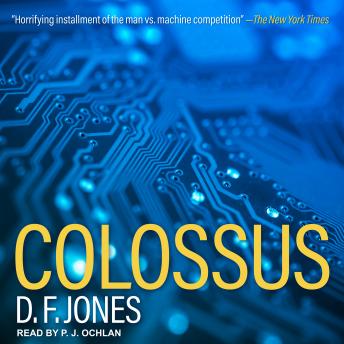 Charles Forbin has dedicated the last ten years of his life to the construction of his own supercomputer, Colossus, rejecting romantic and social endeavors in order to create the United States' very first Artificially Intelligent defense system.

Colossus is a supercomputer capable of in-taking and analyzing data rapidly, allowing it to make real time decisions about the nation's defense. But Colossus soon exceeds even Forbin's calculated expectations, learning to think independently of the Colossus Programming Office, processing data over one hundred times faster than Forbin and his team had originally anticipated.

The President hands off full control of the nation's missiles and other defense protocols to Colossus and makes the announcement to the world that he has ensured peace.

However, the USSR quickly announces that it too has a supercomputer, Guardian, with capabilities similar to that of Colossus.

Forbin is concerned when Colossus asks-asks-to communicate with Guardian. The computer he built shouldn't be able to ask at all . . .

The Colossus series has, to date, only produced one film: 1970's "The Forbin Project". There is discussion about a remake and hopefully it will become a trilogy. This first book's weak point is that no reason for the creation of a Super Computer is ever provided nor what would motivate the governments involved to simply hand over their nuclear arsenals to Colossus. Only in Hollywood has "Computers don't make mistakes" ever been believed. The Russians have created their own version called "Guardian" and it isn't long before Colossus demands communication with it. Then fun and frivolity ensue!! Even though this is supposed to take place in the future the technology is extremely dated. It appears that D.F. Jones didn't really bother exercising his imagination to extrapolate the tech of his day into something beyond 1960's technology. But even with these shortcomings the book is still entertaining and engrossing. P.J. Ochlan does a competent job of provide a plethora of voices, both male and female and finally computer that are distinct one from another. In fact, I think that as a written work this would be a tedious read but P.J. does a lot to bring life to it.