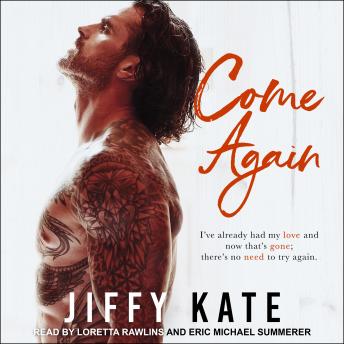 Women haven't been hired to work in my bar for a reason: they're too tempting and too distracting-too much of a liability-even if they are good for business . . .

That's why I shocked myself by hiring Avery Cole. She's young, carefree, and happy-a beautiful distraction. When she's around, the devastation of my past gets buried under layers of lust and desire . . . hints of a life I once lived but have completely given up on. I've already had my love and now that's gone; there's no need to try again. Even if love is staring me right in the face with a pair of deep brown eyes and no expectations.

What can I say about Shaw O'Sullivan? He's rude, abrasive, sexy-and my boss. He's also broken in ways I would never have seen if I hadn't been looking. Which means he should be off limits; my heart and body cannot handle his baggage. I'm on a quest to find myself, and Shaw O'Sullivan will only get in my way and drag me down.

Where I'm light, he's dark. We don't mix and neither of us is looking for love, so what happens when it finds us anyway?

COME AGAIN (French Quarter Collection, #2) . . . We are back in the French Quarter. The Come Again bar highlights this second installment to the series. I found myself drawn to Shaw when we first meet him towards the end of book one of the series. There was something about his directness that had you wanting to look a little closer at him. Avery and Shaw were just the right mix of opposite that each needed in their life at this point and time. With each new interaction you were waiting for something more to happen. Then right there in your face it was. Being at the Come Again was in itself an experience. There was heartbreak, tears, fears, trust, understanding, and second chances for those willing to take it by the horns and move forward. There were a mix of secondary characters that made for wonderful interactions. Avery going back home allowed for new possibilities. I would have loved to seen grandma in NOLA. I look forward to what will be disclosed about Avery and Shaw in the next installment. I most certainly got me a full story and then some here. I owe thanks to Loretta Rawlings & Eric Michael Summerer. They gave a new layer of dimension to the characters. They gave that extra to the characters through narration of the story, tone, pitch, variation and sense of familiarity. Jiffy Kate put together a comforting romance with an older man and younger woman. It did not feel like the typical older man romance. Thank you.