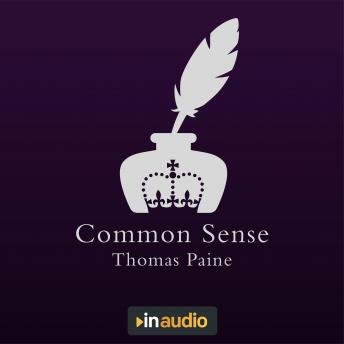 '...well orated by reader George Vafiadis. The language and sentiment are not as outmoded as some listeners might expect and it definitely feels patriotic to hear again the fundamentals of America's beginnings.' - - Kliatt Magazine

George Washington wrote, 'I find that Common Sense is working a powerful change there (Virginia) in the minds of many men.' The passion of the patriot Thomas Paine comes straight on and one can better understand the forces that shaped this country.

Thomas Painewas born in Thetford, England, in 1737. His father was a staymaker. Thomas worked as a tax collector and was let go for petitioning for higher pay. Benjamin Franklin encouraged him to emigrate to the United States in 1774, where he published a series of pamphlets called the American Crisis. In 1787 he went back to Europe and published political books that were publically burned. He went to France and helped draft the French constitution. He was imprisoned for a year before coming back to the United States. He died in 1809.