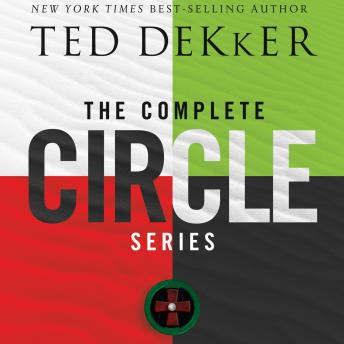 “Black”: Enter an adrenaline-laced epic where dreams and reality collide. Black is an incredible story of evil and rescue, betrayal and love, pursuit and death, and a terrorist's threat unlike anything the human race has ever known.  A virulent evil has been unleashed upon the people of the earth, an unstoppable force bent on the destruction of all that is good.  Only Thomas Hunter can stop it, and he has been killed.  Twice.

“Red”: The mind-bending pace of Black accelerates in Red, Book Two of Ted Dekker's groundbreaking Circle trilogy. Less than a month ago, Thomas Hunter was a failed writer selling coffee at the Java Hut in Denver. Now he finds himself in a desperate quest to rescue two worlds from collapse. In one world, he's a battle-scarred general commanding an army of primitive warriors. In the other, he's racing to outwit sadistic terrorists intent on creating global chaos through an unstoppable virus. Two worlds on the brink of destruction. One unthinkable solution.  Enter an adrenaline-laced epic where dreams and reality collide. Nothing is as it seems, as Black turns to Red.

“White”: In this installment of Ted Dekker's groundbreaking Circle Series, Thomas Hunter has only days to survive two separate realms of danger, deceit, and destruction. The fate of both worlds hinges on his unique ability to shift realities through his dreams. In one world, a lethal virus threatens to destroy all life as scientists and governments scramble to find an antidote. In the other, a forbidden love could forever destroy the ragtag resistance known as The Circle. Thomas can bridge both worlds, but he is quickly realizing that he may be able to save neither. In the surprising continuation of the Circle Series, Thomas must find a way to rewrite history as he navigates a whirlwind of emotions and events surrounding a pending apocalypse. Life. Death. Love. Nothing is as it seems. Yet all will forever be transformed by the decisions of one man in the final hours of the Great Pursuit.

“Green”: Four Novels. Two Worlds. One Story. As foretold by ancient prophets, an apocalypse destroyed Earth during the twenty-first century. But two thousand years later, Elyon set upon the earth a new Adam. This time, however, He gave humanity an advantage. What was once unseen became seen. It was good and it was called . . . Green. But the evil Teeleh bided his time in a Black Forest. Then, when least expected, a twenty-four year old named Thomas Hunter fell asleep in our world and woke up in that future Black Forest. A gateway was opened for Teeleh to ravage the land. Devastated by the ruin, Thomas Hunter and his Circle swore to fight the dark scourge until their dying breath. Now The Circle has lost all hope. Samuel, Thomas Hunter’s cherished son, has turned his back on his father. He gathers the dark forces to wage a final war. Thomas is crushed and desperately seeks a way back to our reality to find the one elusive hope that could save them all. Enter an apocalyptic story like none you have read. A story with links to our own history so shocking that you will forget you are in another world at all. Welcome to GREEN. Book Zero.

Excellent story, the sound volume is low on the recording. Wonderful story of love and heartache and the sacrifices one will make for another. The great romance is a wonderful story to hear.