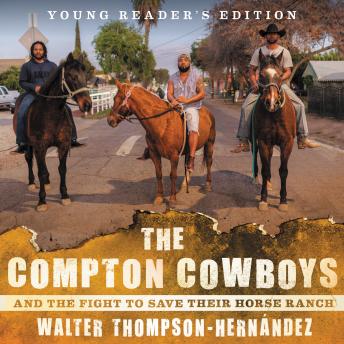 The Compton Cowboys: Young Readers' Edition: And the Fight to Save Their Horse Ranch

Inspired by a powerful New York Times article that went viral, this young readers’ edition tells the uplifting true story of Black men and women from Compton, California, who found purpose through raising and riding horses.

The Compton Cowboys are a group who grew up in the city where Kendrick Lamar and Serena Williams were raised; a city portrayed in the media as ground zero for gang violence. But in 1988, with the creation of the Compton Junior Posse, a youth program set on a horse ranch in the middle of Compton, these men and women found a safe space.

In this young readers’ edition, kids will witness how the Cowboys’ lives were shaped by harsh realities. The Cowboys were able to overcome their struggles by joining the Compton Junior Posse. Now they want to keep the program running to help other children do the same. Black cowboys are a part of history that has been all but forgotten, but the Compton Cowboys have made it their mission to carry on the tradition and be role models for their community.

Compton Cowboys: Young Readers' Edition: And the Fight to Save Their Horse Ranch