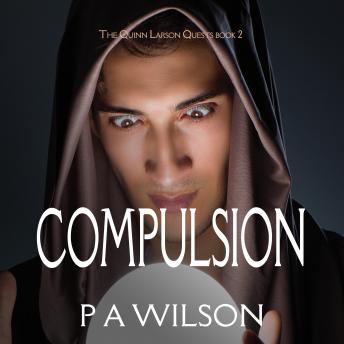 #2 of The Quinn Larson Quests

A budding rebellion among the Sidhe threatens the tenuous peace. Was Quinn’s sacrifice for nothing?

Quinn Larson kept the Real Folk hidden, but the cost was more than any man should bear. Cate, the friend who he hoped would become something more — is dead. His sight is still bespelled, and his spirit broken.

He wants to withdraw and heal, but someone is stealing fairy treasure, and their babies. The ancient Druids have awoken, with an unknown agenda and lot of power at their command.

The demon that killed Cate may have been summoned by a group of clueless Goth teenagers, who could hurt themselves as much as anyone else.

Once again, it falls to Quinn to find the solution to every problem and prevent a meltdown among the magical races.

If you like stories of revenge and sacrifice, you’ll enjoy this second book in The Quinn Larson Quests.

Buy Compulsion today to join Quinn on his quest to save the world one more time.