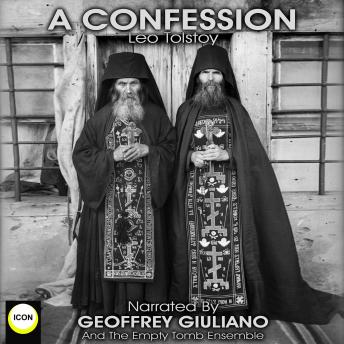 Narrated By: Geoffrey Giuliano And The Empty Tomb Ensemble

Leo Tolstoy's 'A Confession,' written in 1882 shortly after a life-altering spiritual crisis, is a brutally sincere reflection on life, morality, and the nature of faith. Tolstoy describes in great detail the process by which he lost his faith in established Christian churches, the meaninglessness of wealth and fame, the agony of acute depression, and how he overcame misery and dread through personal study of the teachings of Jesus Christ. Along the way, he contrasts the artificial faith and arrogance of educated people with the genuine faith and humility of the Russian peasant. This work, and others of its ilk, were aggressively censored by the Tsarist regime and directly led to Tolstoy being excommunicated by the Russian Orthodox Church.

Geoffrey Giuliano is the author of over thirty internationally bestselling biographies, including the London Sunday Times bestseller 'Blackbird: The Life and Times of Paul McCartney' and 'Dark Horse: The Private Life of George Harrison'. He can be heard on the Westwood One Radio Network and has written and produced over seven hundred original spoken word albums and video documentaries on various aspects of popular culture. In addition, Giuliano is an occasional lecturer at Northwestern University. He is also a well-known movie actor in such films as 'Mechanic Resurrection and the 'Scorpion King' series, among many. Geoffrey is a near life long student of Bhakti (Devotional) Yoga and an ardent animal rights advocate. He makes his home with his son Eden in Bangkok and Vrndavana, and Jaipur India.