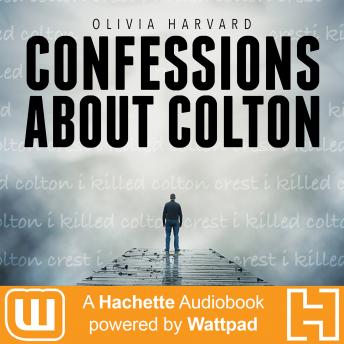 Confessions About Colton: A Hachette Audiobook powered by Wattpad Production

CONFESSIONS ABOUT COLTON is a new release from Hachette Audiobooks: Powered by Wattpad - an innovative collaboration between Hachette Book Group, a leading publisher, and Wattpad, a passionate storytelling community of over 45 million people. Your favorite online stories, now available in your headphones!
When smart and charismatic Colton Crest disappears, his small country town in rural New South Wales jumps into obsessive conclusions of his whereabouts. His parents claim that he's visiting relatives, but even Mrs. Crest seems unconvinced by her own words. So when Colton returns two months later, seemingly unharmed, everyone is both relieved and highly suspicious. There's a shift in the community. There's murder in the air.
On the night before graduation, Colton is found in the local lake. Dead. And on the day of his funeral, his closest companion, Elliot Parker, finds a letter hidden in his jacket pocket with four words that send him spiraling: I KILLED COLTON CREST. There are six more letters to find, six more confessions about Colton, six more clues to uncover why he was murdered.
This is a scavenger hunt to capture a killer and the outcome is destined to end with a bullet and a bang. Elliot is about to learn how to appreciate well-crafted minds... and also fear them.

Confessions About Colton: A Hachette Audiobook powered by Wattpad Production