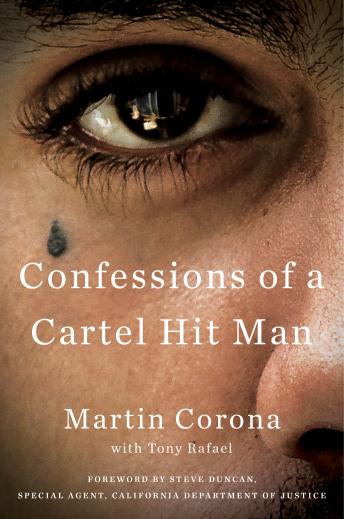 Confessions of a Cartel Hit Man

The true confession of an assassin, a sicario, who rose through the ranks of the Southern California gang world to become a respected leader in an elite, cruelly efficient crew of hit men for Mexico's 'most vicious drug cartel,' and eventually found a way out and an (almost) normal life.

Martin Corona, a US citizen, fell into the outlaw life at twelve and worked for a crew run by the Arellano brothers, founders of the the Tijuana drug cartel that dominated the Southern California drug trade and much bloody gang warfare for decades. Corona's crew would cross into the United States from their luxurious hideout in Mexico, kill whoever needed to be killed north of the border, and return home in the afternoon. That work continued until the arrest of Javier Arellano-Félix in 2006 in a huge coordinated DEA operation. Martin Corona played a key role in the downfall of the cartel when he turned state's evidence. He confessed to multiple murders. Special Agent of the California Department of Justice Steve Duncan, who wrote the foreword, says Martin Corona is the only former cartel hit man he knows who is truly remorseful.

Martin's father was a US Marine. The family had many solid middle-class advantages, including the good fortune to be posted in Hawaii for a time during which a teenage Martin thought he might be able to turn away from the outlaw life of theft, drug dealing, gun play, and prostitution. He briefly quit drugs and held down a job, but a die had been cast. He soon returned to a gangbanging life he now deeply regrets.

How does someone become evil, a murderer who can kill without hesitation? This story is an insight into how it happened to one human being and how he now lives with himself. He is no longer a killer; he has asked for forgiveness; he has made a kind of peace for himself. He wrote letters to family members of his victims. Some of them not only wrote back but came to support him at his parole hearings. It is a cautionary tale, but also one that shows that evil doesn't have to be forever.

Confessions of a Cartel Hit Man