Confessions of a Vintage Guitar Dealer: The Memoirs of Norman Harris 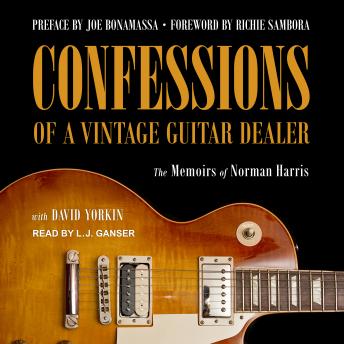 In Confessions of a Vintage Guitar Dealer, Norman Harris tells how he became the world's leading seller of vintage guitars. As founder and owner of the legendary store Norman's Rare Guitars, he has sold some of the finest fretted sting instruments to the biggest stars in the world, including George Harrison, Bob Dylan, Tom Petty, and many others.

In 1970 Harris moved to Los Angeles in hopes of hitting the big time in music. His first plan was performing, but plan B was buying and selling guitars, and he had no idea how much opportunity for this there would be. Many groups came to LA also hoping to hit it big, but those who didn't might have to sell their instruments. This helped make early-1970s Los Angeles a haven for beautiful vintage guitars. At the same time, Hollywood was beginning to realize the value of time-correct instruments in film, and the recording industry recognized the high-quality sound vintage instruments produced. The value of these instruments has grown dramatically since the '70s, and the vintage guitar market has become an international phenomenon-with Norman Harris at the center of it all.

Confessions of a Vintage Guitar Dealer: The Memoirs of Norman Harris