Connected: The Surprising Power of Our Social Networks and How They Shape Our Lives 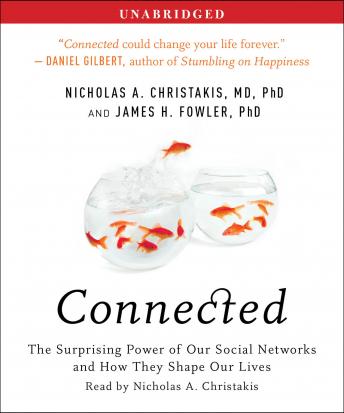 Narrated By: Nicholas A. Christakis

A colleague’s husband’s sister can make a person fat, even if they don’t know her. A happy neighbor has more impact on happiness than a happy spouse. These startling revelations of how much people truly influence each other are revealed in the studies of Drs. Christakis and Fowler, which have repeatedly made front-page news nationwide. Their work shows that six degrees of separation is a notion of the past. Now, there is what Christakis and Fowler call the “Three Degrees Rule”—individuals are profoundly influenced by people up to three degrees away from them.

In Connected, the authors explain why emotions are contagious, how health behaviors spread, why the rich get richer, even how people find and choose their partners. Intriguing and entertaining, Connected overturns the notion of the individual and provides a revolutionary paradigm—that social networks influence ideas, emotions, health, relationships, behavior, politics, and much more. Connected will change the way listeners think about every aspect of their lives.

Connected: The Surprising Power of Our Social Networks and How They Shape Our Lives