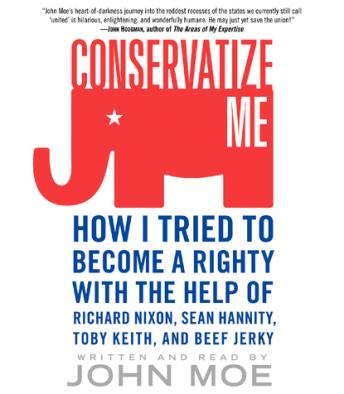 Conservatize Me: How I Tried to Become a Righty with the Help of Richard Nixon, Sean Hannity, Toby Keith, and Beef Jerky

What would happen to a liberal's mind if he subsisted entirely on conservative media and rhetoric? That's what critically acclaimed political humorist, NPR commentator, and McSweeney's contributor John Moe sets out to learn in Conservatize Me.

We always hear how everyone in America is firmly planted in red or blue. They're permanently conservative or irreversibly liberal. But are we all really that locked into the left or the right?

John Moe, raised in a family of proud left-wingers and living in deeply liberal Seattle most of his life, sets out to determine if what we believe is based on environment or actual conviction. Moe puts himself on a strict conservative regimen: He resets his radio dials from NPR to Rush Limbaugh, goes head-to-head with some of today's most influential conservative thinkers for a series of 'conversion sessions,' and through it all tries to maintain positive standing with his lefty wife and young but already liberal kids.

Conservatize Me will strike a powerful chord with millions of disgruntled Americans ready for a fresh, humorous, and highly entertaining look at our country's political landscape. Will Moe end up getting a Dick Cheney tattoo and swearing loyalty to the Christian Coalition? Will he get a Dennis Kucinich tattoo and dedicate his life to cooking vegan food at protest rallies? Listen and find out.

Conservatize Me: How I Tried to Become a Righty with the Help of Richard Nixon, Sean Hannity, Toby Keith, and Beef Jerky