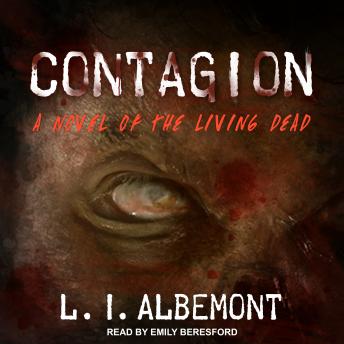 A small mountain town is isolated by a snowstorm as an ancient evil, gone pandemic, turns the residents into the living dead. Almost overnight the town becomes a snowy tomb of the roaming, hungry infected. Stranded by the weather, hiding, a small group of survivors follows the progress of the disease as society around them and around the world begins to break down. Determined to escape, they find that the normal rules of civilization don't apply anymore. Will they be able to adapt to this strange, hungry new world?

"Contagion" is plagued by uneven treatment. The author shows mastery in setting the broad context for a zombie apocalypse, using media broadcasts as a way to gradually reveal the spreading infection and social decline. She also anchors the tale to an elaborate historical record, fictional but believable until the final entry, so that a reader is given more to consider than the immediate events. Through the historical accounts, readers are given hope that some future is possible even as they experience the dread of society falling before hordes of reanimated corpses. From the books opening, it is immediately clear that the author does not intend to sugarcoat the ferocity of the zombies or their bloodlust, and that is a good thing. The settings are well described and always believable. The introduction of Virginia's first companion is heart-wrenching for its dissonant innocence. This excellent foundation is unfortunately offset by characters that appear to be little more than tropes. Early on, two things become obvious. One is that literally everyone who Virginia knows by name will have some role in advancing the story. Hundreds of millions of people die namelessly, many of them people with means and skills neither Virginia nor anyone she knows can hope to match, but she and her circle will be held central to the story regardless of how implausible it is. That doesn't preclude featured characters from dying, but if they die, their deaths will be heroic or otherwise momentous (at least in the moment), while the deaths of others are trivialized. A character's longevity can be instantly calculated based on how interested Virginia seems in that character: people she expects to find will be found, and if they serve an obvious purpose, they will remain until their purpose ends. To some extent, this is true in most books, and it isn't always a problem. However, Virginia's goals, motivations, and needs, are rather predictable, so the plot is like playing an early computer RPG: get this to go there, get that to go here, wash, rinse, repeat. someone will have an idea. The idea will not work immediately, but its flaw will be apparent and correctable, and it will work eventually. The other thing that becomes obvious early in the story is that Virginia is driven but not particularly bright. She regularly makes poor choices, even in the context of the situations in which she places herself, and her singular focus often endangers others. She is oddly detached from the moral and practical horrors of social collapse, and the few cases in which she encounters troubling situations involving other humans are brought down to her level by making the antagonists ridiculously flat characters. time and again, you'll wonder how it is that Virginia and her chosen few keep surviving when no one else does. At some point, the question stops being why people are make such foolish choices and becomes why no one at all realizes the choices were foolish even after the fact. The plot ends up being like a soap opera, where you can see exactly where it's going most of the time and always know roughly what will happen next. Through it all is Virginia's abject selfishness and the certainty that she will get to the next flag no matter how implausible, even as others fail no matter how much better positioned for success. Only once, late in the book, does Virginia's group encounter anyone who truly grasps and accepts the nature of the situation and behaves with the resolve and decision towards the infected that should be a requirement for survival in the world the author has created; Virginia never shows such resolve. Shortly thereafter, Virginia and her companions are complicit in doing something perverse and horrifying immoral to an uninfected person just to tie up a loose end, and no one objects. These would-be heroes are out for themselves and would gladly drain the world if they had the means and it meant their own gain, but they are permitted to parade around as if they were The Good Guys without reflection. It's the contrast between exceptional world building and poor character development that makes "Contagion" a middling entry in the zombie horror genre. The former pulled me in sufficiently that I bought this book after listening to a 30-minute preview. By the end, the latter had annoyed me so much that I don't plan to continue reading the series.

Interesting storyline but the voice of the narrator was very annoying

This novel has potential however the narrator is terrible. I would sooner poke needles in my eye than listen to this narrator again. Oh my, just unbearable.

Good book, looking forward to next in series.

Book was okay. Narrator was rushing through the story like she wanted to get it over with.