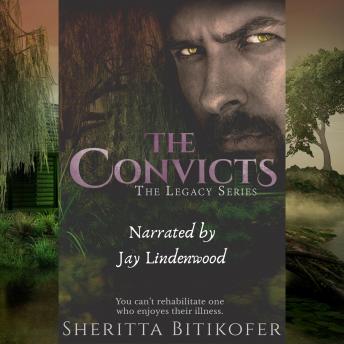 The Convicts (A Legacy Novella): Book 9 of the Legacy Series

New Orleans - 1815
Bart Croxen never thought he would see his son again, especially not in Louisiana. Andrew Jackson has finally lifted marshal law over the port city after the Battle of New Orleans and everyone is eager to praise and honor the valiant war heroes who defended them against the invading British. Creoles, Acadians, Irish, Germans, Spanish, and plenty of French citizens welcome Baratarian pirates like James and Robert into their social circles, but they are more interested in reuniting with their estranged relative. They come to find out that Bart has made a reputation for himself as a tamer of rougarous, werewolves like himself who had developed a taste for human flesh. On his plantation of sharecroppers - mostly former slaves that Bart has freed himself - he rehabilitates deranged werewolves in secret.
James has arrived just in time to see his father in action, though he still has some reserves about how the plantation and virtual prison is being operated. Although everyone assures him that Bart is generous and selfless to a fault, he is still not convinced. After an escape attempt by a particularly stubborn and dangerous rougarou, some start to think he may be onto something.
~From the author of the Loup-Garou Series, the Legacy Series takes you through history, revealing the events that lead up to the finale of the Loup-Garou Series. Backstories to pivotal characters like John Croxen, Michael Gennari, Darren Dubose, and Katey's parents, are told in intimate detail with each installment of the series.~

Convicts (A Legacy Novella): Book 9 of the Legacy Series

This title is due for release on April 27, 2019
We'll send you an email as soon as it is available!