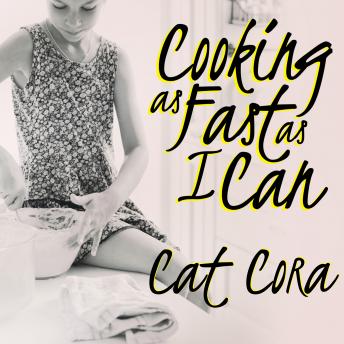 Cooking As Fast As I Can: A Chef's Story of Family, Food, and Forgiveness

Before she became a celebrated chef, Cathy Cora was just a girl from Jackson, Mississippi, where days were slow and every meal was made from scratch. Her passion for the kitchen started in her home, where she spent her days internalizing the dishes that would form the cornerstone of her cooking philosophy incorporating her Greek heritage and Southern upbringing-from crispy fried chicken and honey-drenched biscuits to spanakopita. But outside the kitchen, Cat's life was volatile.

In Cooking as Fast as I Can, Cat Cora reveals, for the first time, coming-of-age experiences from early childhood sexual abuse to the realities of life as a lesbian in the deep South. She shares how she found her passion in the kitchen and went on to attend the prestigious Culinary Institute of America and apprentice under Michelin star chefs in France. After her big break as a cohost on the Food Network's Melting Pot, Cat broke barriers by becoming the first-ever female Iron Chef.

Cooking As Fast As I Can: A Chef's Story of Family, Food, and Forgiveness