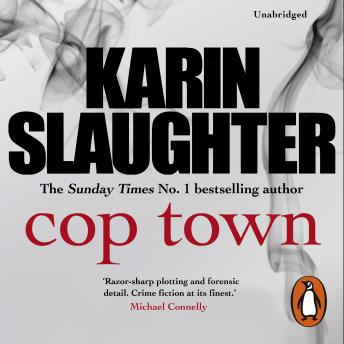 Featured in The Times Top 10 Crime Books of the Decade

'Karin Slaughter is simply one of the best thriller writers working today, and Cop Town shows the author at the top of her game – relentless pacing, complex characters, and gritty realism, all set against the backdrop of a city on the edge. Slaughter’s eye for detail and truth is unmatched . . . I’d follow her anywhere.' GILLIAN FLYNN

Atlanta, 1974. As a brutal killing and a furious manhunt rock the city, Kate Murphy wonders if her first day on the police force will also be her last. For life is anything but easy in the male-dominated world of the Atlanta Police Department, where even the other female cops have little mercy for the new girl.

Kate isn’t the only woman on the force who is finding things tough. Maggie Lawson followed her uncle and brother into the ranks to prove her worth in their cynical eyes. When Maggie and Kate become partners, and are sidelined in the search for the city’s cop killer, their fury, pain, and pride finally reach boiling point.

With the killer poised to strike again, will Kate and Maggie have the courage to pursue their own line of investigation? And are they prepared to risk everything as they venture into the city’s darkest heart?