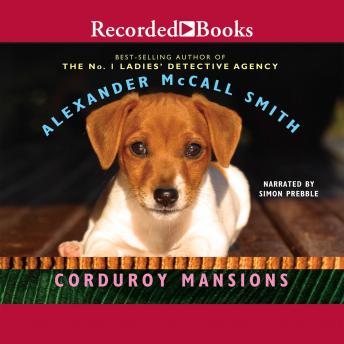 In the Corduroy Mansions series of novels, set in London's hip Pimlico neighborhood, we meet a cast of charming eccentrics, including perhaps the world's most clever terrier, who make their home in a handsome, though slightly dilapidated, apartment block. Corduroy Mansions is the affectionate nickname given to a genteel, crumbling mansion block in London's vibrant Pimlico neighborhood and the home turf of a captivating collection of quirky and altogether McCall-Smithian characters. There's the middle-aged wine merchant William, who's trying to convince his reluctant twenty-four-year-old son, Eddie, to leave the nest; and Marcia, the boutique caterer who has her sights set on William. There's also the (justifiably) much-loathed Member of Parliament oedipus Snark; his mother, Berthea, who's writing his biography and hating every minute of it; and his long-suffering girlfriend, Barbara, a literary agent who would like to be his wife (but, then, she'd like to be almost anyone's wife). There's the vitamin evangelist, the psychoanalyst, the art student with a puzzling boyfriend and Freddie de la Hay, the Pimlico terrier who insists on wearing a seat belt and is almost certainly the only avowed vegetarian canine in London. Filled with the ins and outs of neighborliness in all its unexpected variations, Corduroy Mansions showcases the life, laughter and humanity that have become the hallmarks of Alexander McCall Smith's work.