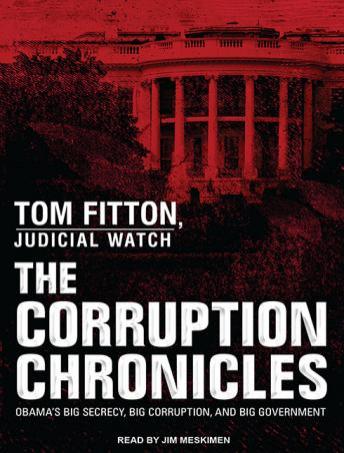 Judicial Watch, America's largest nonpartisan government watchdog,
has investigated the Clinton, Bush, and Obama administrations. Judicial
Watch is the group that helped impeach Bill Clinton and took the Bush
White House secrecy all the way up to the Supreme Court. Since the
beginning of the Obama administration, this grassroots group has filed
over 700 open records demands and dozens of lawsuits, including a
successful fight over the secret Obama White House visitor logs. In this
book, Fitton reveals what Judicial Watch has uncovered in its battles
on high-profile issues, such as the bailouts, Obamacare, terrorism, the
Black Panther scandal, czars, the ACORN network, illegal immigration and
stealth amnesty, the Obama White House's actions against FOX News
Channel, and Obama's radical Chicago connections. The book
provides highlights of Judicial Watch's historic role in pursuing
corruption and the truth during the Clinton and Bush administrations. The Corruption Chronicles comprehensively
highlights how the Obama administration, which promised to be the most
transparent administration in history, became the most secretive in a
generation, and it exposes the inside facts that the Obama
administration has desperately fought-sometimes in court-to keep from
the American people.

This title is due for release on August 6, 2012
We'll send you an email as soon as it is available!