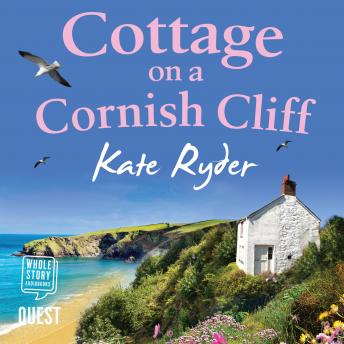 Cottage On A Cornish Cliff

Returning to the heart of her beloved Cornwall, Kate Ryder weaves another deliciously irresistible tale of desire, jealousy and the search for understanding, set against the stunning backdrop of the glorious Lizard Peninsula.

Globally renowned actor Oliver Foxley has made the most difficult decision of all and set the love of his life free, in order to try and bring his family back together. But there's a magnetic pull back to both Cara and Cornwall that Oliver can neither deny nor resist...Heartbroken for a second time in her short life, single mother Cara knows she has no choice but to pick up the pieces yet again and carry on. Perhaps a complete change of scenery would help her, and her young family? Yet her mind, spirit and heart yearn for the windswept shores of her Cornish Cove... Cara and Oliver face the agonising choice between following expectations, or following their hearts. How will their story end...?

I've really enjoyed this mini-series - Summer in a Cornish Cove & Cottage on a Cornish Cliff. I'm so pleased I committed to both! I understand readers begged Kate Ryder to write the sequel and although it's rather different from its prequel (the first book has a distinct thriller element provided by an obsessed stalker) this time, the focus is on the individual lives of Cara and Oliver 18 months on. It's a particularly brave construction and, I think, works really well! Although this is a sequel it can be enjoyed as a standalone story, as there’s plenty of quite unobtrusive catching up with the earlier story. As with the first book, I kept looking for reasons to take time out from real life to enjoy Ms Ryder's created world, so believable are her characters. As for the descriptions of Cornwall... I'm packing my bags right now! The narrator is the same as for the first book in the series, Summer in a Cornish Cove, and my observations are the same. She has a lovely speaking voice, but I believe some of the characters are portrayed differently to how Ms Ryder intended. Also, occasionally, the American/Australian accents morph into Irish! However, don't let this put you off - Rachael Beresford narrates this series well and with emotion, and her skill at speaking as the children is tremendous and hits just the right tone.