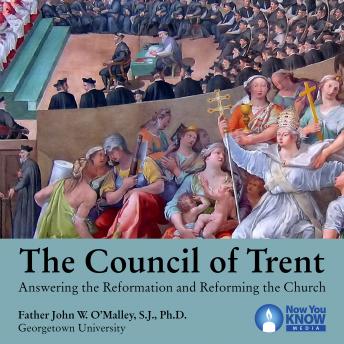 The Council of Trent: Answering the Reformation and Reforming the Church

You will love this fascinating and exceptionally well-taught course.

What really happened at the Council of Trent?

After Luther, Calvin, and Henry VIII, the Council of Trent is one of the most frequently invoked names regarding the Reformation. Even so, few know much about it.

As renowned historian Fr. John O’Malley demonstrates, the reality of Trent differs radically from how you probably conceive of it. In this 12-lecture course, you will discover the council’s wide-reaching cultural and religious influence over the centuries. This Council profoundly impacted the Catholic Church, and its decisions had repercussions throughout Europe.

You’ll find this a great course whether you are interested in history, theology, or Catholic doctrine. The leading political figures were deeply involved, as were the five popes who reigned during the fateful eighteen years over which it stretched. Lurching from one crisis to the next, they all had something at stake in the Council.

Despite these political maneuvers, the Council professedly concerned itself with religion, especially Catholic doctrine and reform. The dramatic debate surrounding reform resulted in decrees that have had a lasting impact on the Church.

The story of the Council continues long after its implementation: indeed, historians deem the four hundred years following Trent the “Tridentine Era. ” As you will discover, the legacy of this landmark Council is vital to an understanding of the Church today.

Council of Trent: Answering the Reformation and Reforming the Church

This title is due for release on May 31, 2012
We'll send you an email as soon as it is available!