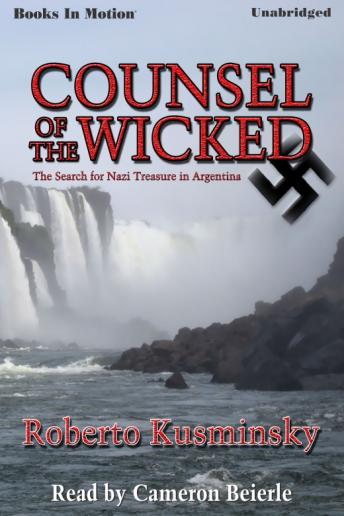 Counsel Of The Wicked

During and after WWII, Peron allowed thousands of fleeing Nazis to find refuge in Argentina. U-boats were sighted near coastal towns, and priceless works of art stolen from European victims of war appeared surreptitiously in Buenos Aires auction houses. Dr. Gerson Asher, a surgeon with a past, and Nicole, a beautiful geneticist, plunge into a deadly cat-and-mouse chase with a ruthless art dealer who is intent on recovering treasures looted by the Nazis and hidden in South America decades earlier. Gerson follows cryptic clues left by Max, his grandfather, who is murdered just before he can tell Gerson the shocking discovery he\'s made. The vertiginous chase becomes increasingly treacherous as Gerson and Nicole try to evade the members of an organization bent on recovering what they believe to be rightfully theirs . . .